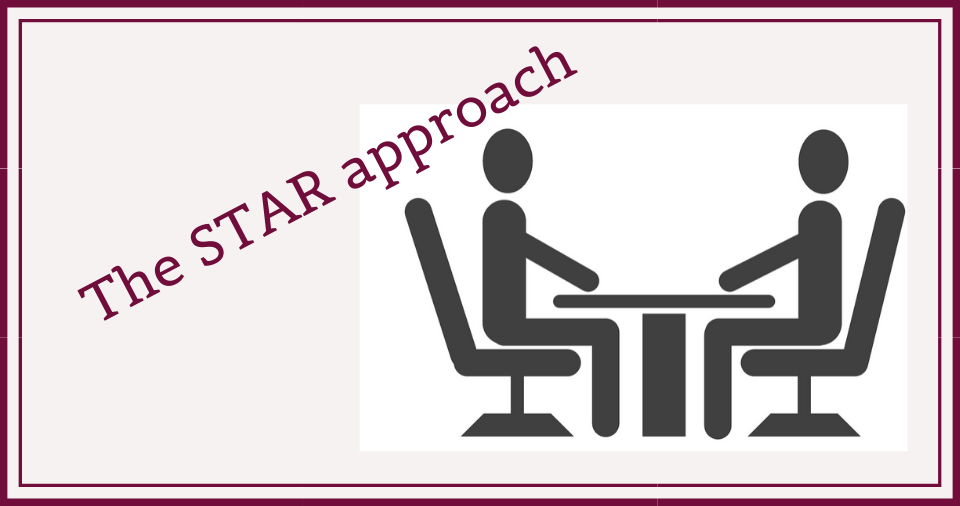 Answering competency questions in an interview can be tricky, especially if you feel like you are not prepared for the interview. They usually start off as “tell me about a time when..” At some point we have all struggled in interviews. But using the STAR approach can provide some guidance when answering these questions.

What is the STAR approach and how do you use it?

The STAR is an acronym and it stands for Situation, Task, Action and Response. It is an interview technique that can help you answer competency or behavioral questions in interviews. When answering these questions, the interviewer is looking for real – life examples as they want to see how you react or act in certain situations which could be relatable to the role that you are interviewing for.

This involves setting the scene of your example. You must describe a specific situation rather than a general description of what you had done in the past. This situation can be from a previous job or relevant experience. It can cover where you were, the size of your team, why the task was important, who it was for, etc. Picking the right example is key and try to show behaviours that are favourable or skills that are relevant to the role. Especially in your technical abilities, leadership, planning, teamwork, initiative and people skills.

Once you have described the situation the next step is discussing the objective that you had to deal with. What was your responsibility in the task? What was the goal? It is important to give detail about the specific aspects that you were responsible for. Make sure what you are saying is clear, concise and relevant to the question being asked.

Once you have described the task you then describe the action you took in facing this challenge or situation. That might involve the specific steps you took or what was your contribution. Don’t forget if you were working in a team don’t forget to describe what you did rather than the team. So, it is important to use “I” rather than “we”. Remember the interviewers want to hear what you did rather than hearing about your colleagues. Make sure that you describe step by step what you did as this will give a bit more structure to your answer but also give plenty of information. Did you use a particular software, or technique? Did you have to prioritise your tasks?

This involves describing the outcomes of your actions. It’s important to describe how the situation had ended as well as what you had learned, what goals were achieved and what you accomplished. Always try to have a positive result at the end and don’t be shy to describe your success! However, if you are asking you about a time when you had made a wrong decision and it was situation that didn’t end in a positive way (within reason) then describe what you had learned from the situation or what you would have done differently to make it into a positive answer.

You can never predict what questions are going to be asked in an interview. I would always recommend having a few examples prepared for the competency based questions before going into an interview. This can be quite useful as some of the examples or situations can apply for multiple of questions and you can always tailor it to the question being ask. I would look at some of the most popular questions that are asked interviews. But it is always important to make sure that the example that you are giving is relevant to the question being asked. It’s quite easy to get distracted from what is being ask. Try not to use the same example twice as you want to show off your experience. If you suddenly go blank in the interview and forget the example that you had prepared, don’t be afraid to ask for a few seconds to have a think about what you are going to say. The interviewers would always prefer an answer that is structured rather than one that is made on the spot and isn’t relevant.

Don’t forget to practice answering these questions before the interview and soon it will become second nature for you!

Looking for a new job within the Science industry?

Next Article : 5 SIGNS TO LEAVE YOUR JOB